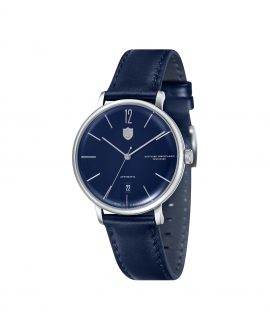 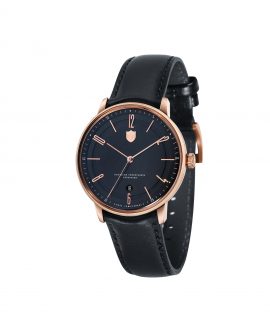 The Bayer Automatic Swiss impresses with its typical German dial design. It carries the typical Bauhaus heritage and can be found in earl watch design from the last century. The original Design reaches back to the 1930’s, a time when the Bauhaus modernism was in its heyday. Fine typography and hands are supported by slightly different levels on the dial. This makes the watch easy to read, without having big hands or indices. The small date window at 6 o’clock completes the design. The fine leather strap fits perfectly on the watch case with its curved end-links and the rose yellow plated dial completes the excellence.

Shipping On every workday from our warehouse in Germany. FREE EU shipping and outside EU we charge 6€.

VAT EU prices are incl. VAT. For orders outside the EU the VAT is automatically deducted during checkout.

Be the first to review “DuFa – Bayer Automatic Swiss 9016 – DF-9016-03” Cancel reply
Scroll To Top
We use cookies to improve your experience on our website. By browsing this website, you agree to our use of cookies. More Information
Accept