With the release of the “Tudor Oyster Prince Submariner” (Ref: 7922) in 1954 Tudor set foot into the world of professional diving watches. As many know Tudor is a subsidiary by the undisputed “King of the watch industry” Rolex and it was already visible in design and quality on Tudor watches. The design furthermore influenced the standards of the most dive watches known today. After Rolex has released its well known Submariner (Ref: 6204), Tudor introduced its before mentioned own “Submariner”, but for a much more affordable price point.

In 2012 Tudor launched the “Black Bay” and within a decade it became a true symbol of the brand. Since then Tudor became a serious competitor the watch industry, especially within the wide range of sports- and dive watches. The collection includes over a dozen variations already with different colored dials, case materials to sizes and complications. The Black Bay still is the affordable alternative to a Rolex Submariner and remains unmistakeable as its younger brother, without trying to imitate or being an “homage watch” to it. Even more important to mention is that unlike its big brother the Rolex Submariner, the Tudor Black Bay is available, without waiting years for it. At this price-point it is lot of watch for the money with a well known brand, design and quality.

If you want to give your BlackBay the perfect look for every day and every occasion, we have collected some strap recommendations for you in our Tudor Black Bay Strap Guide:

Tudor introduced the Heritage Black Bay around the time Baselworld was taking place in 2012. The watch was an instant success thanks to its classic dive watch styling and was awarded by the jury of the Grand Prix d’Horlogerie in Geneva the following year. The watch impressed by its vintage design elements; The edgy case design with its distinctive shape, contours and a size of 41 mm case size. The large crown and lack of crown guards pays tribute to the first Submariner models by Tudor and Rolex and a domed crystal, a simple aluminum bezel insert, unique snowflake hands complement the vintage style. The use of a sapphire crystal and a clean dial and a modern movement gave the vintage inspired watch modern elements and technology, that were asked by todays divers. The only downside for some watch enthusiasts was the usage of an standard, but well known and accurate Swiss ETA movement (ETA 2824). 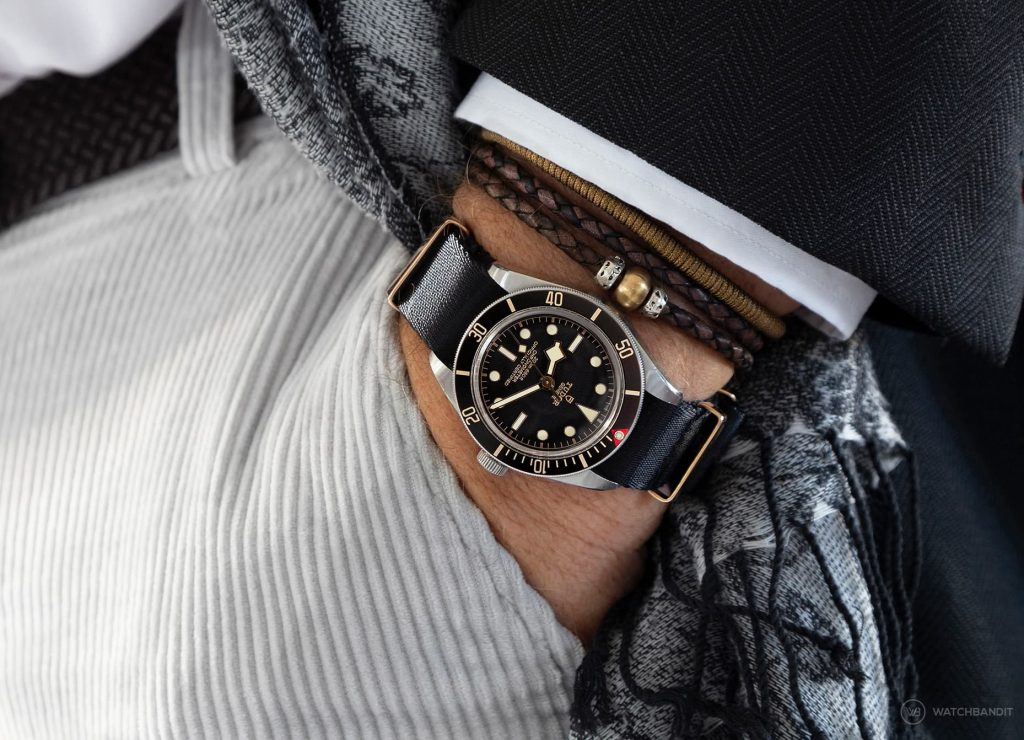 In 2016 Tudor fulfilled many peoples wish and the watch was equipped with a mechanical movement developed the MT5602 in-house caliber, manufactured and assembled by TUDOR themselves. The watch was renamed to just “Black Bay” and the overall design of the watch did not change, just the lower text print on its dial was now straight, instead of curved like on the ETA models. The black version of the Black Bay is the most classic and typical vintage diver design with its rose gold elements and details. 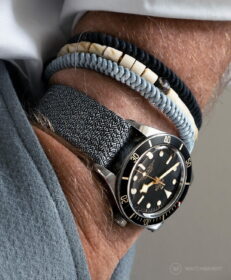 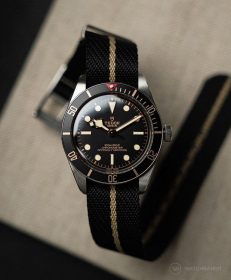 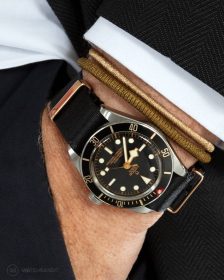 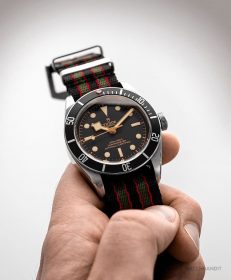 The Tudor Black Bay Fifty-Eight made its introduction in 2018 and can be seen as a “facelift model”. Once again, Tudor takes its heritage and blends it with a few modern design details and engineering. It seems fresher, younger and more sporty in a modern way than its predecessor and that’s exactly what it should be. The Black Bay Fifty-Eight unites the classic Tudor diver design with the modernity of todays dive watches with only minor changes. 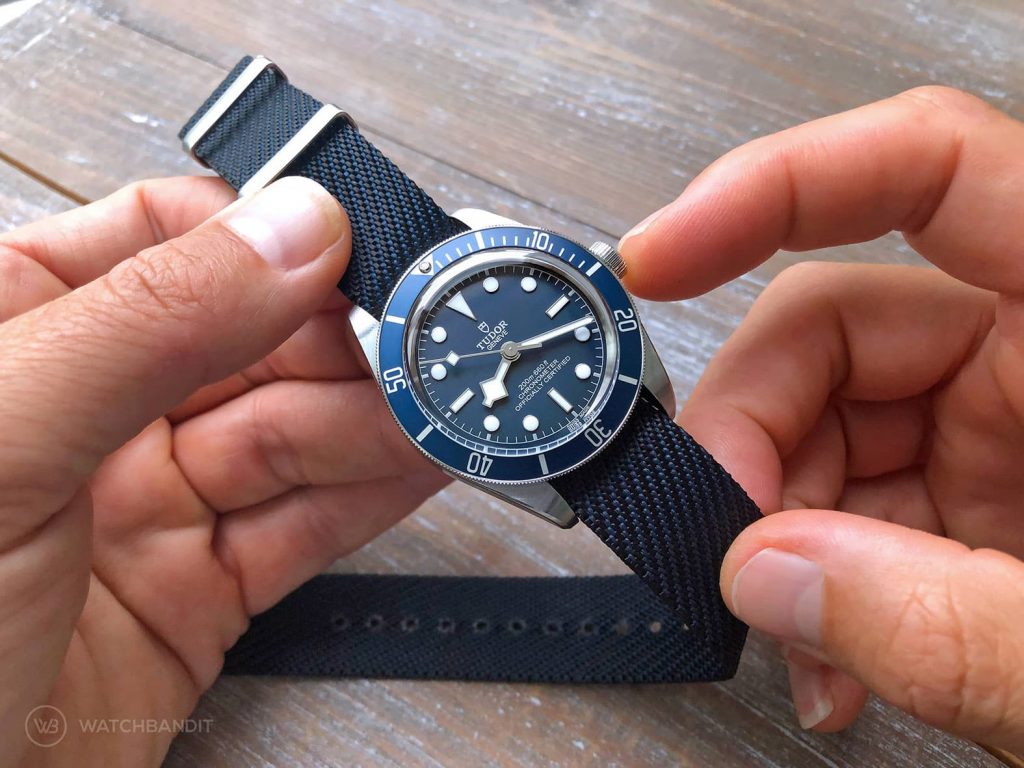 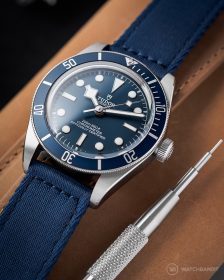 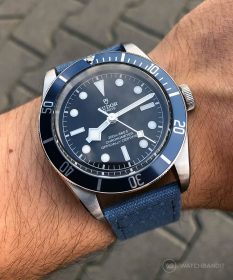 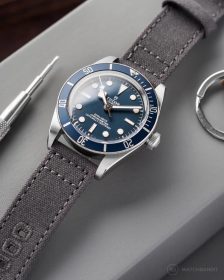 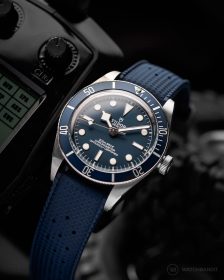 Check out the Video by Tom aka @bowlofsalmon why the Tudor Blackbay 58 could have been / or still is the perfect one watch collection for him. He’ll take a closer look at the pretty details of the BlackBay and shows how versatile this dive watch is with different strap options, including the OEM leather version. M79030N-0002

If you’re looking for a Black Bay with a complication, then we recommend going with the GMT. It’s not only of the most classic and distinctive complications around, but also the red/blue aluminum bezel is just the right pop of color and goes well with many watch straps. – More pictures of GMT combos will follow! 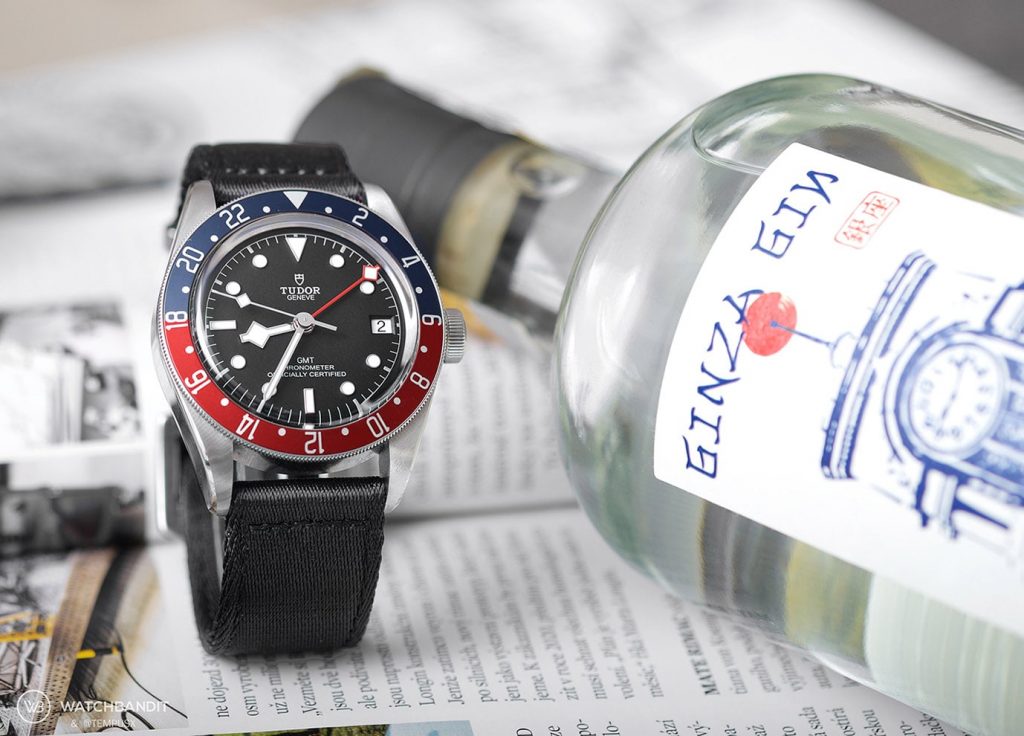 Since the early 1970’s Tudor is known for its chronograph watches Chronographs (Tudor Oysterdate Chronograph 7031 and 7032, as well as the “Montecarlo” 7149, 7159 and 7169) With the Tudor Heritage Chrono which was relaunched in 2010, the Chronograph became the backbone-complication of the Black Bay collection. 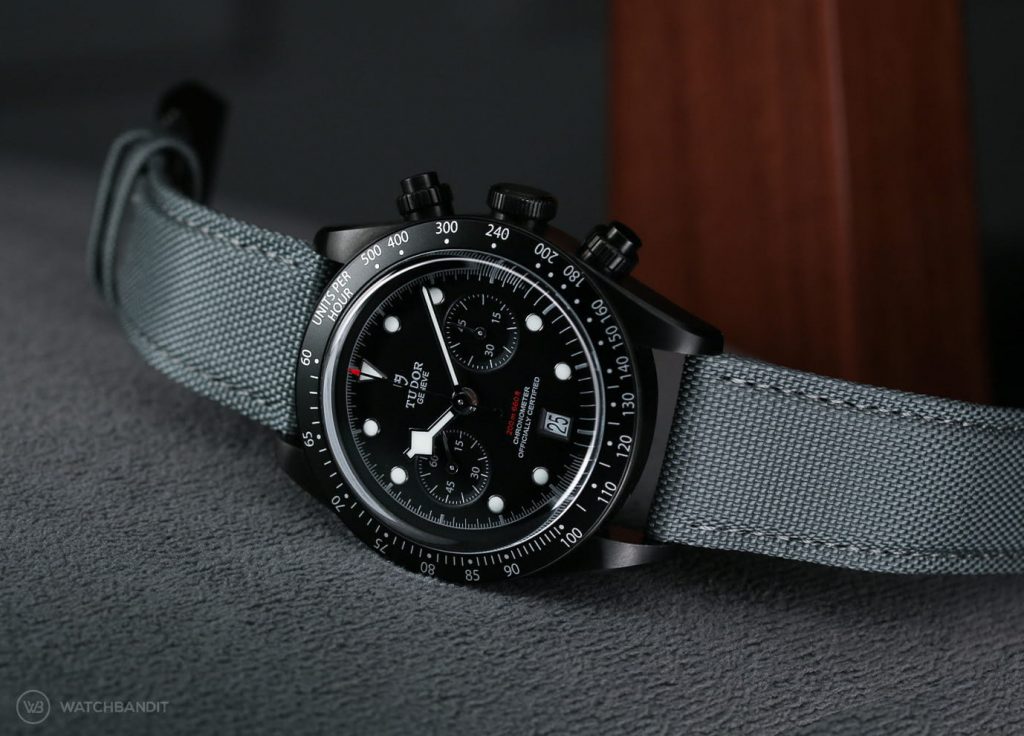 The Black Bay Chrono mixes racing inspired design elements like the classic tachymeter, with the classic diver design elements and performance (good readability and 200 m water resistance) of the base model. Again it is the affordable and available alternative to the Rolex Daytona. In 2019 during Baselworld Tudor introduced the Bi-Color Steel/Gold model of the Chrono and an all black limited edition for New Zealand’s national rugby team, as one of the official sponsors of the Team called “All Blacks”.

Photos were taken by our brand ambassadors  @jensb1954, @kidwizzle @gulenissen, @rolopalooza and @watchddicted Thank you for the awesome pictures of our straps on your Tudor Black Bay!

Please note: Any watches pictured in this blog post are for illustration purposes only and the watches are not included in our strap offers. Straps may vary slightly from those pictured.